‹ Back to all posts

3 Steps to Moving From Traditional to Agile Marketing

If you could wave a magic wand and grant your marketing team increased productivity, better visibility, higher quality work, more engaged team members, and the ability to effectively adapt to change, would you do it?

Of course you would. Nobody is dying to work on a slow, unproductive team that can’t react to new information.

Unfortunately, there’s no magic wand that bestows those kinds of results. They come from true and lasting agility built on a firm cultural foundation.

So if magic wands are out, how do we start the construction process? Everyone’s blueprint is a little different, but here are three steps you can take now to start off the right way.

Think of this as creating a firm foundation on which to build your Agile marketing mansion. You’ll need something firm to support your teams through turbulent times, and that means spending time on education and tool selection.

In the 2018 State of Agile Marketing Report, we discovered that teams who have already adopted Agile marketing saw value in these time investments.

We asked, “Which of the following have been the most valuable during your adoption of Agile marketing?” and received the following responses:

They may not cover exactly what your team needs to know, especially as you grow in maturity and encounter more complex problems, but they can certainly help build solid understanding across your team.

In-person training, either via workshops or professional Agile coaches, are typically more expensive, but they offer customized attention that isn’t available online. Coaches can help ensure your initial adoption goes smoothly, shortening the painful early days and getting you to positive outcomes sooner. They can also bolster practicing Agile marketing teams as they strive to evolve their process.

Second, carefully consider the tools and technology you’ll be using to support your Agile transition. Some teams, especially large groups who aren’t co-located, need a tool immediately. Training on its functionality should be part of their kickoff efforts and incorporated into the Agile process from the outset.

Other teams, particularly those who are small and work together in the same physical space, may feel comfortable delaying adoption until later in their Agile journey. This can be a beneficial delay because the team knows more about what they need and are more likely to choose the right piece of technology.

Once you’ve worked on your foundation by committing to education and smart tool selection, it’s time to build your first room, also known as the pilot.

There are two options for piloting agility: the pilot project and the pilot team.

When you use a pilot project, you identify an upcoming piece of work with a clear start and end date and commit to running the whole thing using an Agile approach. Here’s a useful visual guide to picking the right pilot project: 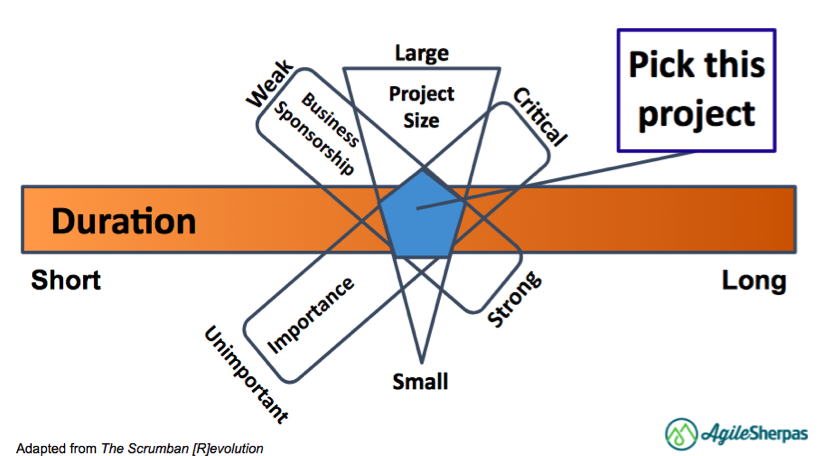 Note that you want a project that lasts a reasonable amount of time (4-6 weeks usually works well), and isn’t too big. Basically, you want to find something that’s representative of the average level of complexity that your team usually deals with so you know your pilot’s success (or failure) will translate to other kinds of work.

You also want to ensure that the pilot project has a fairly high level of support from higher-ups and is considered fairly critical.

This can seem a little counterintuitive because it seems to introduce a higher level of risk. But without this feeling of importance surrounding the project, it’s likely to be postponed and/or have its members pulled onto other work.

If you don’t have projects that can be isolated into a useful pilot, you can instead try a pilot Agile marketing team.

This approach calls for creating a single cross-functional Agile team that’s able to complete its work from start to finish without going outside the team. They’re likely to be working on multiple projects, but they could also work on a single pilot project. 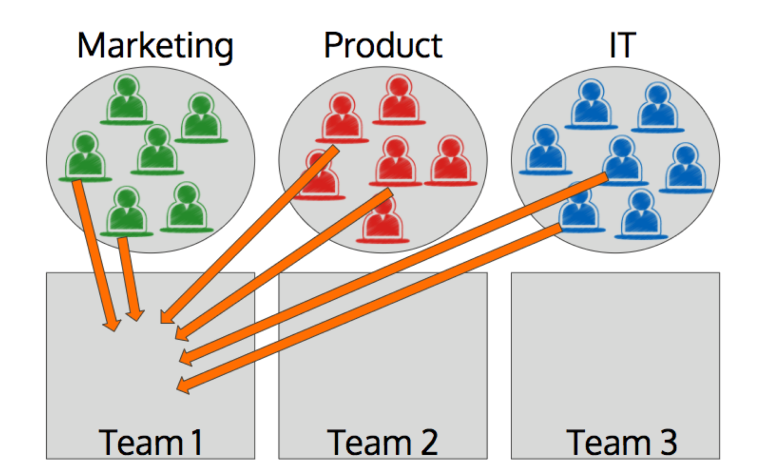 Members of a pilot team need to be eager to join it; drafting people against their will often generates resentment and may sabotage the pilot before it begins.

Whatever kind of pilot you pick, make sure you can measure its success or failure. You need quantifiable data to prove that the pilot worked and make the case for expanding agility into the rest of marketing.

This step may be at the end of the list, but that doesn’t mean it’s the least important. In fact, it’s even more foundational than Agile tools and education.

The culture of your organization is like the ground beneath your lovely Agile mansion. No matter how well constructed it is, if a sinkhole opens up underneath it, you’re out of luck. At the end of the day, culture will eat agility.

Oftentimes executives persistently demand Agile teams set their process aside to handle their pet projects. This kind of behavior not only disrupts teams, it undermines the organization’s commitment to Agile.

Why should other leaders respect the sanctity of an Agile team when executives don’t?

Likewise, keeping people on Agile teams who aren’t suited to the Agile environment can eat away at the team from within. Some marketers struggle to adapt to the team-centric, rapidly iterating world of Agile (and it’s not always the people you expect).

This is one of many places where Agile coaches can come in handy, but leaders must also be prepared to educate, reinforce, and, in some cases, remove team members who prove themselves to be a bad fit in the new culture.

The bottom line is that Agile is a mindset that must be reflected throughout an organization’s culture and manifested in everyone’s behavior.

These aren’t the only stages in moving from traditional to Agile marketing, they’re only a few of the first.

But if you take the time to build a firm foundation (and make sure the ground you’re building on will support agility), you’ll find the rest of the construction process proceeds more smoothly.

For more information about agile processes, register for the upcoming webinar in the Aprimo Advantage Series: How to Go Agile Without Going Crazy on March 27th!

Andrea is the president and lead trainer at AgileSherpas, a training, education, and consulting company designed to help marketing teams transform the way they manage their work. She is a sought-after international speaker on the intersections of Agility and marketing, having appeared recently at SXSW, Content Marketing World, MarketingProfs B2B Marketing Forum, MarTech San Francisco, and The Business Agility Conference to name a few. Her most recent book, Death of a Marketer, chronicles marketing’s troubled path and the steps it must take to claim a more Agile future.

The Challenge of Marketing Through Distributed Partners

Join over 45,000 people who receive marketing insights every two weeks.